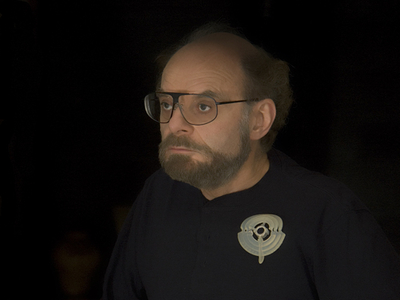 Stanley Lechtzin is the 2009 recipient of the SNAG Lifetime Achievement Award, the highest honor bestowed by the Society of North American Goldsmiths, presented at the 40th SNAG conference in Philadelphia. His peers have recognized him as an artist and educator for his ongoing achievements and contributions that expand and elevate our field.

Born in 1936 in Detroit, his early experiences included jewelry repair, drafting, and cartography. In 1956 he entered Wayne State University where he majored in crafts and studied jewelry with Philip Fike, earning the BFA degree in 1960. He studied with Richard Thomas and earned the MFA degree from Cranbrook Academy of Art, where his contemporaries included Fred Fenster, Heika Seppa, Brent Kington, and Michael Jerry. In 1962 he moved to Philadelphia to establish and head a new craft department at Tyler School of Art. In 1965 he was appointed founding chairman of the Crafts Department.

“In the 1960s and 1970s, his experiments with electroforming—an industrial process for metal-plating modeled forms—placed him at the forefront of the American jewelry movement and helped establish Philadelphia as a major center for innovative metalwork. Though the process dates to the early nineteenth century, Lechtzin was the first to adapt it for artistic purposes. In his work, Lechtzin took full advantage of electroforming’s potential to yield large-scale objects that are relatively light, allowing him to create full-bodied yet wearable sculptural forms. He also exploited the organic structures that “grow” in the acid bath during the process. These metal accretions bear a welcome resemblance to natural forms found in plants or geological structures.” 1

“Lechtzin next turned his attention to the creative potential of plastics, reveling in their wide color palette and transparent light effects. The great variety of this man-made material held such appeal for the artist that his jewelry became increasingly dominated by plastic rather than metal.” 2

From Lechtzin’s biographical statement (2009): “In 1978 Lechtzin became enamored with yet another means of technology, namely the computer. Since then, he has virtually abandoned handwork, believing that the computer has rendered such labor-intensive techniques redundant. He believes artists are society’s cultural antennae and as such must address current societal issues. This has led to his vision of computer-aided-design / 3D printing as a new craft medium. Lechtzin sees unique objects as always having social importance. Therefore he is engaged in an exploration of how crafts must change, while still maintaining their historical values. In this investigation he is joined by his collaborator, Daniella Kerner. Together this husband and wife team merges their lives . . . their professions . . . their art.”

His creative work and research has expanded horizons and changed the face of the metals and jewelry field: from his early exploration and use of electroforming, to the US patent awarded in 1982 for a method for achieving karat gold electroforms, from the exploration and masterful works in plastics, to the use of vapor deposition imaging, and from the earliest exploration of the personal computer, to his ongoing commitment to CAD-CAM and 3D Printing. In each instance, Stanley Lechtzin has been a preeminent figure responsible for the adaptation, adoption, and advancement of new technologies. The significance and quality of the work is evidenced in the long history of grants and fellowships he has received to support his work including 5 NEA grants and fellowships, 2 Pennsylvania Council for the Arts grants, a Mellon foundation Grant, and a Temple University grant. More important is the way in which collective attitudes toward technology and the ‘unfamiliar’ have been changed. In the fall of 2006, Stanley was once again a founding member of a new organization known as CadLaboration whose mission is “to contribute to the ongoing evolution of the field of jewelry and metals by fostering education and substantive collaboration among artists working with digital technologies.” His commitment to collaboration and research in new technologies continues to provide new opportunities for all of us.

Stanley Lechtzin is among the most recognized and influential artists in our field who has challenged and redefined aesthetic values of our time. He is a prolific artist whose work has been presented in solo and group exhibitions for 7 decades, throughout the United States and the world. His work is held in numerous public and private collections, testament to his achievement by curators, scholars, historians, and his peers. Collections include: The Renwick Gallery of the Smithsonian American Art Museum, The Cooper-Hewitt Museum, The American Craft Museum, Detroit Institute of Arts, Goldsmiths’ Hall, Helen Williams Drutt, The Metropolitan Museum of Art, Museum of Fine Arts – Houston, Museum of Arts and Design – MAD, Objects: USA, The Johnson Collection of Contemporary Crafts, Robert L. Pfannebecker, Pforzheim Museum of Jewelry, Philadelphia Museum of Art, Tokyo University of Fine Arts and Music, Yale University Art Gallery. In addition, his work and research has been published in more than 70 books, and innumerable papers and articles over 6 decades.

Now in his 50th academic year, Professor Lechtzin continues to head the Metals / Jewelry / CAD-CAM Area. The Tyler program has evolved and prospered through his dedication and vision, providing thousands of students and hundreds of graduates the opportunity to acquire new knowledge and abilities, to develop problem solving and critical thinking skills, and to aspire to contribute meaningful new ideas to the world. One of the most significant contributions of any teacher and program is the successful practice of their graduates. While many understand the Tyler program through the lens of technology, the success of its graduates is far more complex: artists, designers, teachers, writers, critics, scholars, gallerists, and advocates. A partial list would include myriad and diverse contributors to our field: Paley, Moty, Griffin, Maniscalco, Quigley, Yoo, Metcalf, Kerner, Threadgill, Berman, DePaul, Ross, Lalik, Farrell, Tatalick, Bucci, Strzelec, Starrett, and so many more emerging. Each student experience at Tyler shapes thinking, goals, and careers.

Curriculum is critical to the advancement of a program, and the educational experience through which artists and designers are cultivated. It requires continuous redesign to ensure the growth of a program and a field. Stanley Lechtzin leads by example through his efforts to design and implement innovative curricula. By his dedication to practice-based research, he has challenged the field to look forward, to explore new materials and technologies, and to contribute to the rethinking and advancement of aesthetic values. He has led by example, invited our collective participation and exchange, and provoked us all. He has exemplified the artist/educator as researcher and designer and cultivated many educators to seek to establish other meaningful curricula and programs. Over the past 50 academic years, the graduates of the Tyler program have conducted innumerable artist interviews as historical research, and technical research projects, both of which are archived in audio/visual collections at Tyler, and are part of a plan to be shared with the field, once digitized. In 1989 Temple University recognized Lechtzin for his teaching with the Great Teacher Award.

In 1969 Stanley Lechtzin was one of 9 founders of SNAG, and over the period since then he has advocated vigorously and without cease for the best interest of our field, for education and professional practices. His work ethic is remarkable, his dedication and advocacy for others, tireless. He has served on juries and reviews, presented papers and panels, provided consultation to education and industry, all as part of the best practice. On the 40th anniversary of SNAG in Philadelphia his peers shared their great respect in bestowing SNAG’s highest honor on Stanley Lechtzin, an exceptional person who has dedicated his life to the advancement of our field.