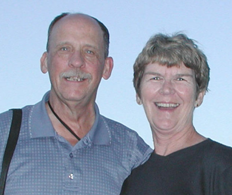 It is with great sadness we report the death of friend Garret DeRuiter, former SNAG board member and the first Editor of the SNAG Newsletter, after a three-year battle with bladder cancer. He fought this battle with strength, determination, and with the quirky, good-natured sense of humor that those of us who had the privilege to call him friend so admired. He died peacefully on the morning of May 1, 2012.

I first got to know him at the blacksmithing workshop held at Southern Illinois University’s Little Grassy Lake summer camp in 1970. I don’t remember us introducing ourselves; we just started sharing a forge, getting filthy from the coal and the sweat. I immediately enjoyed his company. He was a generous, easy going, and his positive outlook was infectious.

At the business meeting at the end of the Tucson conference in 1980, the new SNAG Newsletter was presented to the membership for the first time. When Garret was introduced to the audience as the editor, he was fast asleep. The room was fairly large and my memory tells me it was well-populated. I don’t remember what prompted him to stir, but the entire crowd watched him sputter back to consciousness, and no one laughed more than he did. Under his leadership the newsletter became one of the important milestones that helped SNAG evolve into a more populist, relevant organization.

An accomplished artist, Garret, was an active metalsmith and exhibited extensively for many years. Garret is survived by his wife Marilyn, three daughters, and six grandchildren. One of his daughters, Margaret, followed in his footsteps. She was one of my students, graduated from SIU-C with a BFA in metals, and is an accomplished metalsmith.