“The Advantages of TIG Welding Forms for Enameling” By Sean Macmillan 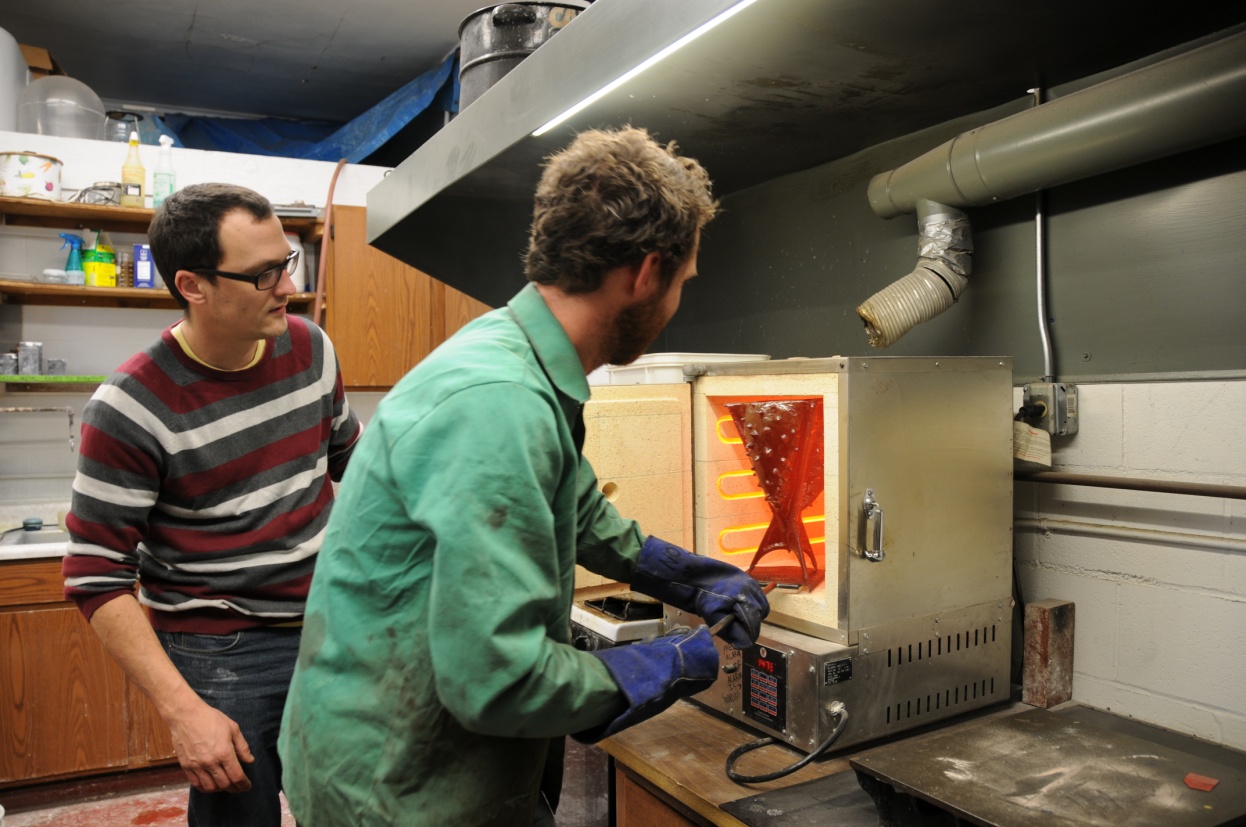 The following article has been in the works for several years and we are happy to finally publish it.  Sean Macmillan, Metalsmithing faculty at Slippery Rock University in Pennsylvania, approached me a couple of years ago at a SNAG Conference about writing a technical article.  Everything seemed to come together recently when he received a grant to further pursue this research.  Through this article, he is able to share his experiences in both welding and large-scale enameling, which are two studio techniques that are rarely combined.

Since welding is essentially fusing metals, one does not have to worry about seams opening back up in the enamelling kiln, so theoretically, you are only limited by your welding skills in what you can create.  This article shows the various steps that I have developed to create a few different larger scale works.

I decided to approach this very methodically.  I designed a hollow constructed object exactly the same way as I would if I was soldering it together.  I created paper templates, cut and bent sheets of copper.

I welded them together in similar steps that I would have if had been soldering.  After some rough finishing, the piece was ready for enamel.  The plan was to use opaque enamels, so an air mini-grinder with abrasive pads made quick work of the excess material around the welds.  I started with a single layer of opaque steel grey on the outside, and then I used the same color inside as my counter enamel.

Since it was intended as a test, I intentionally ignored the advice from Thompson Enamel about 90 degree bends and constructed an object with a lot of right angles.  The enamel has a tendency to not penetrate all the way into the inside of a corner, so often the enamel will crack off the outside of that corner.  I did get some of these cracks, but I was very excited to see that I could weld an object together and then enamel it.  I chose to increase the scale and push the form quite a bit.

One of the next experiments was a larger hammer-formed copper and steel piece.    The goal for this test was to explore the possibilities of transparent enamel over dissimilar welded pieces.  This piece also tested the size limitations of my facility.  The electric burnout kiln had to be used for this piece because it stands 13 inches tall.

Because of the vast difference in thicknesses, the steel parts should be enameled first.  They need a bit more time to reach the proper temperature or the enamel will be under-fired and flake off of the steel.

I decided to explore dissimilar metals in greater detail.  I designed a couple of pieces where all of the filler material would be a different metal.  One piece used sterling silver to weld the copper forms and another used copper wire to weld all of the steel together.

Another experiment was needed to test if I could weld directly to an already enameled piece.  I found this is possible if you treat your weld like an auto-body technician would.  By doing small tack-welds, one can successfully weld a very thick piece that is enameled.  You basically zig-zag your way around the piece.  This method is primarily used to reduce warpage of thin material, but I thought it would work to not over-heat the enamel.  I had to take a lot of breaks in order to keep it cool enough.

Other assembly methods took advantage of welding by attaching long legs to pieces that would eventually be concealed inside the forms.  The legs were simply long strips of copper that were coiled out of the way during firing.  When all of the firing was finished, the legs were unrolled then tack-welded to the inside of the form.  The two steel halves are then welded together.  The stand and base are fabricated.  After a bit of sanding and grinding, the piece is basically finished.

A second method that I use is to weld plates that will support the enameled pieces from the inside.  This method is very similar to traditional cold connection methods in enameled work.

I have only scratched the surface of the possibilities of combining these two techniques.  Since TIG welders are becoming more and more common in Metalsmith’s studios, their advantages are becoming more apparent to our community.  This method of working has greatly increased my abilities to add color, texture and depth to my work. 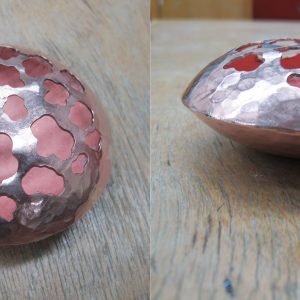 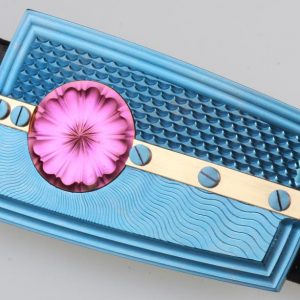 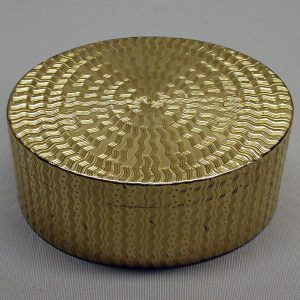