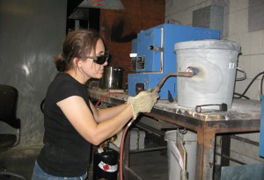 Coincidentally, this article by my colleague in the Metalsmithing & Jewelry program of the University of North Texas, Ana Lopez, is a great follow-up to our previous article related to enameling by Sean Macmillan.  Although Ms. Lopez does not often include enamel in her work, her experimentation with this project is certainly of value to metalsmiths and enamelists alike interested in affordable alternatives to firing larger enamels.  I’m sure you will appreciate her tenacity in finding an acceptable approach while maintaining a sense of humor about it all.

This article is about how a non-enamelist came to design and build (and fail and build and fail and build and then build again) a large, torch-fired enameling kiln. First I would like to add a point of clarification: this is about building a torch-fired enameling kiln, not about torch-firing enamels. This is to say that I was attempting to create a kiln environment heated by a torch in which to fuse enamels to metals without the torch flame making direct contact with the object being fired. Although a metallic surround is sometimes used to help manage and contain the heat during a torch firing, most torch-firing of enamels involve applying the torch flame directly to the surface of the metal being enameled. As Deborah Lozier points out, this will cause some discoloration at the point of contact and size limitations depend on torch size.[1]

What I was after was a kind of alternative enameling kiln design that might be useful in less equipped (or even portable) workshops such as a summer camp, but that might also enable more practiced enamelists to fire larger works than their current electrical kiln might accommodate. This article makes good companion reading to the technical article that immediately preceded it, regarding tig welding with enamels. 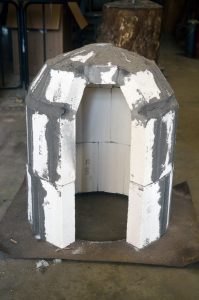 My initial design was based on the beehive ceramic kiln form. Cylindrical and topped with a dome, this was constructed of #23 soft firebricks with kiln cement mortar and featured a vertical aperture by which the progress of the firing might be viewed. A raised internal turntable was constructed to enable rotation of the work and to provide an offset mesh surface onto which larger pieces might be affixed for increased stability. It was an impressive construction and an utter disaster. No amount of indirect firing with an oxy-acetylene torch would coax the enamel into fusing – the interior appeared to be too vast. We even tried bricking up most of the vertical aperture, but to no avail. 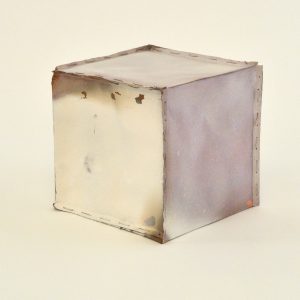 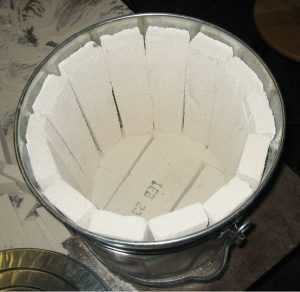 Deciding that we needed to set our sights lower in terms of scale (and running low on mortar) we next decided to fit the interior of a small steel trash can with a lining of fire bricks. 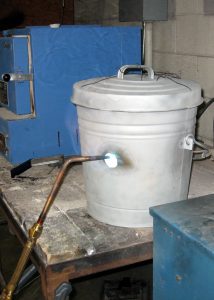 A soldering board was cut to fit within the lid interior. We learned the hard and smoky way that the steel can needed to be sandblasted or sanded prior to firing in order to remove surface coatings that did not approve of fire. Despite the closely mitered bricks, the heat of the torch did not travel well around the interior and enamel vitrification was only achieved on the corner nearest to the torch portal. Sigh. 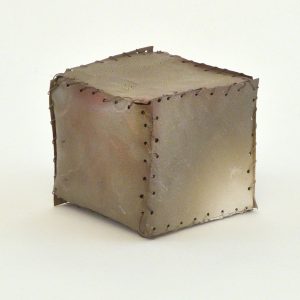 Test piece: sewn 4” copper foil cube, white liquid base coat enamel BC 1070 from Thompson, applied with an airbrush. Test piece was suspended from a hole in the lid and thus rotated; Torch: Oxyacetylene with rosebud tip; Result: Disappointing failure 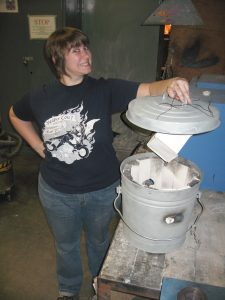 When in doubt, add more heat! We cut a second torch port opposing the first and tried again. This time we used oxyacetylene opposed to an acetylene-air Prestolite torch. We also switched to a lower temperature enamel and did achieve uneven vitrification. Just following our victory dance, large chunks of the enamel flaked off the metal substrate. This was most likely due to oxidation that took place while the kiln took several minutes to heat up (or perhaps it was just appalled at our dancing). 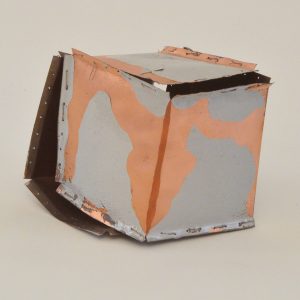 Success! With a suggestion from Jeff McClung that we might approach the construction more like that of a burnout kiln, we cut a circular hole out of the lid to act as a flue and replaced all the firebrick with one inch thick Kaowool. Kaowool is a refractory ceramic material that has a fibrous consistency and is available in rolls. The kaowool was simply cut to fit and placed within the can. Two pairs of holes were drilled on the underside of the lid and the kaowool attached there with steel binding wire. Our test piece was placed upon an enameling trivet, raised by one of our soft firebricks (we bought two whole boxes of these, I was going to use the darned things!). 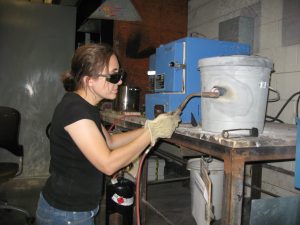 A propane weed-burner torch was substituted for the oxyacetylene. The kaowool did a much better job of insulating the kiln and a glowing red interior developed in half the time of our previous attempts. 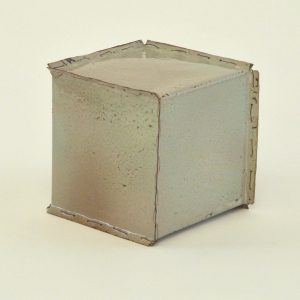 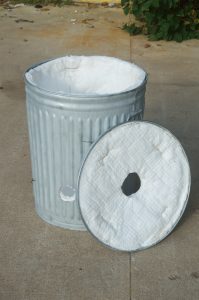 As the 4” cube was not much larger than something I had previously achieved with an oxyacetylene torch and an industrial soup can, I was determined to take our previous success and try to achieve the same results on a larger scale. A twenty-four gallon trash can was purchased, sand blasted, and lined with kaowool. The lid had a flue cut into the center and was likewise lined with kaowool. Two ten-inch cubes were sewn from the twenty eight gauge copper foil to test with both oxyacetylene and propane. The oxyacetylene was am immediate and apparent success. 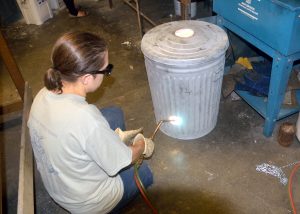 The whole cube took approximately one minute to fire. Some over-firing was evident on the sides nearest the torch port. It is believed that by further raising up the piece being fired and/or by having more clearance around the circumference, the heat would circulate and fire more evenly. 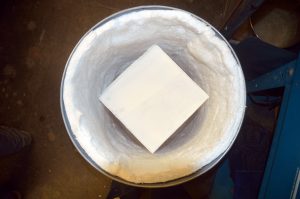 We also tried Kiln 4 with a large weed-burner propane torch. This took about four minutes to get up to temperature and achieve vitrification. However, after the enamel cooled it began to crack off the cube. 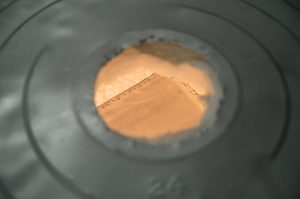 We believe that this was once again to oxidation the developed while the kiln was getting up to temperature. 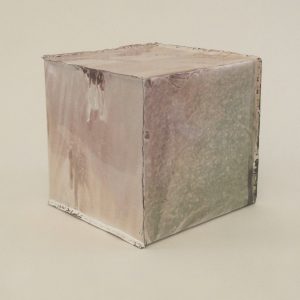 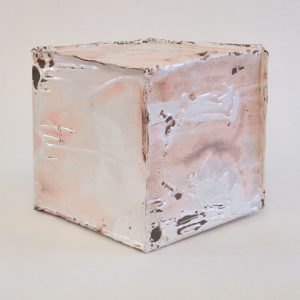 Using a steel trash can and kaowool, it is quite easy to build an informal enameling kiln that may be fired with a torch. Those wishing to use a propane torch should restrict the can size to twelve gallons or smaller. Those with access to an oxyacetylene torch will find that they are able to fire relatively large pieces.

The sandblasted steel trash cans will rust more easily with their protective coatings removed. There are paintable refractory coatings for metal that will withstand torch temperatures, if you want something longer-lasting.

Also, it is recommended that you leave the piece in the kiln with the torch off in order to let it cool down slowly and reduce the risk of thermal shock.

Much thanks is due to Melissa Grady, a student apprentice who co-wrote the initial grant   and helped to build kilns 1-3. She was a valuable resource for brainstorming and a very skilled second set of hands. I would also like to thank Kirsten Kulland, my student apprentice in the fall semester when I finally got Kiln 4 to work. Lastly, a world of gratitude is due to Jeff McClung of the UNT sculpture department whose timely insights led to the first successful firing and prevented me from running over the bloody thing with my car. Construction materials for Kilns 1-3 and all of the consumable materials were provided through the generous support of a University of North Texas Small Grant and the Studio Department of our College of Visual Arts and Design.