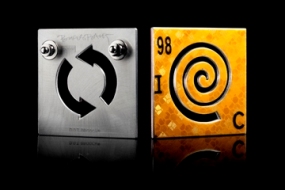 I am very honored to have been personally involved in the process outlined in this article by Boris Bally.  My initial experiences in metalsmithing happened when Boris hired me as a studio assistant.  He patiently educated me in the refinement and attention to detail that his studio work required and I am eternally grateful for that amazing opportunity and mentoring I received.  During our Fall 2012 semester here at the University of North Texas, Boris was a visiting artist and he demonstrated this swaging technique, accompanied by a clear and concise handout (of course!).  He was then willing to expand on the handout to create this article.  I hope you enjoy and appreciate this information and beautiful work as much as I have. –James Thurman, Technical Article Editor 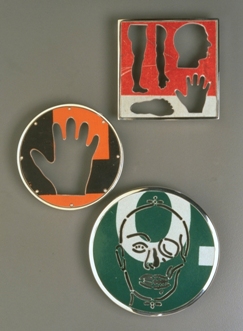 One of my favorite methods for designing new work is to accept a challenge. The 1994 SNAG Portland Conference sported the Annual ‘Pin Swap’ and I decided to make a series of brooches. At the time, I had an abundance of reflective, aluminum traffic sign shards left over from my other larger-scale studio explorations (Transit Chairs!). I started thinking about the various ways to make these colorful scraps wearable. The answer seemed so basic but was entirely elusive: I simply needed a way to connect a pin-stem, or brooch finding. However, based on the base-aluminum, I could not make a durable connection with standard chemical bonding, welding or soldering. To be a lasting connection, it had to be some sort of a cold-joining technique.

Drawing on a production technique I learned while apprenticing in Switzerland in the late ‘70s– of setting round diamonds with a tightly-fitting steel hollow-punch with a single blow- I started exploring. I remember loving the Swiss Basler Mardi Gras Badges, “Fasnachts Plaketten,” which I collected over the years (1). These were usually made of softer materials such as a pewter or white metal. The common safety pin style brooch finding was attached by smashing a few pieces of the base metal around the wire pin back in several strategic locations trapping the pin. 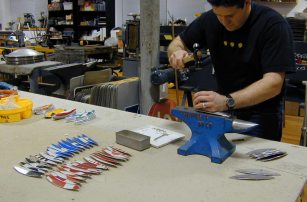 I started by experimenting with various ‘alternative’ means of attachment, commercially available findings, different types of ‘seatings’ and even started teaching myself how to make basic tools to push the aluminum into the right position. Once I figured out a few basics, I was rewarded with a four-blow setting over a tie-tack pin and immediately went into small-scale production. My assistant at the time, former Carnegie Mellon University design student James Thurman, helped me produce the quantities I needed for the SNAG Pin Swap. Since then, the basis of the swaging technique has evolved, through various incremental changes, into a more practical, quicker and effective means of attachment. 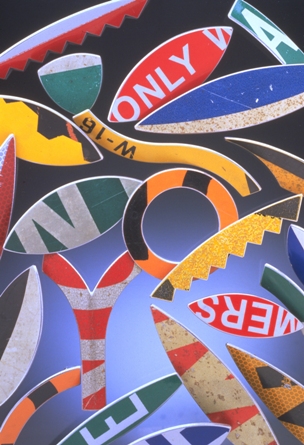 In 2000, I developed the defining series of D.P.W. Brooches®. These became commercially viable while being very wearable, and at the time, provocative. This series helped me win a 1999 Rhode Island Design Fellowship and then in 2001, Tim McCreight and Nicole Bsullak published their book, Color on Metal (2), the first official published specimen of my swaging technique and shows the original four-point method. 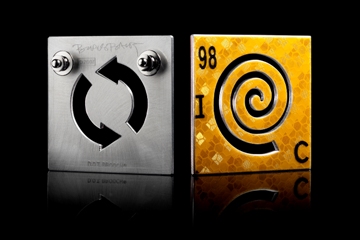 Since then, numerous metals designers and metalsmiths have asked me how on earth was I able to make such a clean, strong connection. Many assumed incorrectly that it must be a soldering or spot-welding technique. At the time, several artists were into recycling (my designs) and so I was reluctant to share the specifics of the swaging. Last year I was invited by Michael Boyd and COMA and again by Professor James Thurman of the University of North Texas to demonstrate ‘a technique.’ I decided enough time had elapsed to feel comfortable sharing technical tricks and trade secrets again! Upon Thurman’s recommendation, I am submitting this to SNAG. 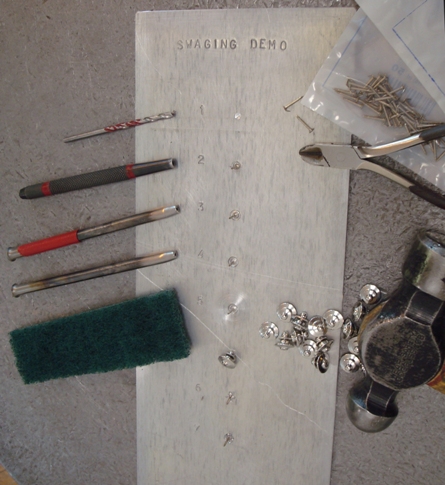 Swaging is a forging process in which the dimensions of an item are altered using a die or dies, into which the item is forced. Swaging is usually a cold working process.  However, it may be done as a hot working process. The term “swage” can apply to the process of swaging (verb), or to a die or tool used for swaging (noun).  In 2000, I developed this method specifically for attaching pin findings to re-purposed traffic signs, enabling me to use the colorful, reflective fragments as brooches. My technique works best on the soft, thick (usually 2.5mm +) aluminum traffic sign sheet.

Making the Punches:
Buy a large, common nail set tool set (Home Depot) or concave chasing tool set from a jeweler’s supplier. My favorite punches were commissioned and made by Valentin Yotkov (http://www.valentinyotkov.com) twelve years ago.

Shape 3 punches by first annealing them to take out their temper. Use a 1.5mm bit with lots of coolant fluid and slowly drill into center of each punch by hand (on a small lathe is best for centering hole) at least as deep as the tie tack posts’ length (mine are over 14mm deep). Then grind with various ball-burrs, preferably diamond-grit, to create 3 concave punches of incrementally varying depth (0.9mm deepest, next 0.7mm, and finally 0.3mm). Polish the insides and edges of the punches (white-diamond/ buffing wheel). Re-temper the heads of the tools. Now they are ready to use for swaging the tie tack posts!

1. Re-sharpen a standard 1/8” diameter (approx. 3.2mm) drill bit to have a duller point angle of 150 degrees (standard is ca 118 degrees). The larger this angle becomes, the deeper you will be able to drill into the material. The more material will be able to grip the pin when it is set.

Now drill a ‘blind’ hole, at least 1 mm deep, being VERY careful not to drill all the way through.

Prepare the tie tack posts by clipping away the protruding ‘nib’ on the pad.

Carefully position the first, deepest of the three punches over the pin. Be certain punch is centered.

Use hammer: strike tool firmly, securing the finding by bringing a burr of metal toward the center pin while beginning to cover the pad. Note: from this point on, the secure pin can hurt you- handle with care!

3. Position the second of the three punches over the pin.
Use the same hammer to strike the tool and push the metal down farther over the pad of the finding.

4. Position the last, flattest of the three punches over the pin.

Lightly, use a hammer to strike tool and burnish the metal down flat, hiding the finding’s pad beneath a layer of polished metal.

5. Using a piece of abrasive pad, rotate around the pin, creating a shining, abraded finish.

Now the pin is ready to attach!

Finally, you are ready to attach the clutch to secure and protect against the sharp pin. 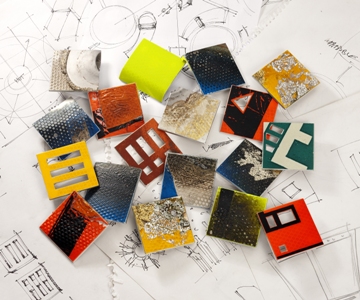 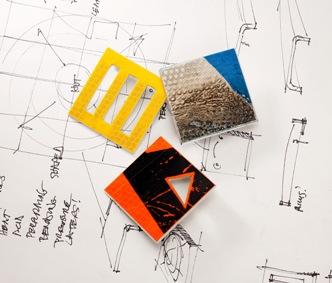