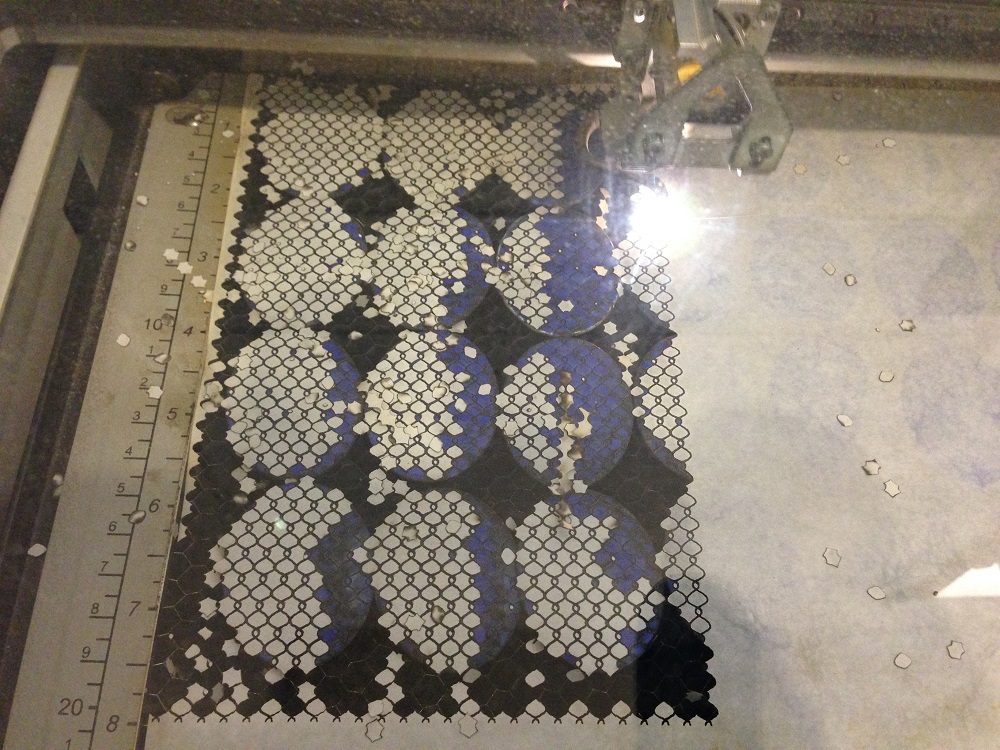 Given the increasing use of digital technologies by individual makers, companies, and educational institutions, I am very excited to share Erin Turner’s research with you. A current metalsmithing & jewelry graduate student at the University of North Texas, Erin has been using laser cutting and etching in a variety of ways in her studio work. When she noticed significant variations in the quality of the etching on different enamels, she began an in-depth testing of them to determine why. She was able to work with colleagues in UNT’s Department of Materials Science and Engineering to do that testing. We hope this is useful information as people move forward exploring the variety of new technologies available to us all. — James Thurman, Technical Article Editor

Many of my pieces involve enameling as a surface treatment for color and texture; however incorporating fine lines often involves delicate Cloisonne, Sgraffito or a myriad of other techniques that never quite fit with my needs. That is until I discovered Arthur Hash’s beautiful enameled brooches, which involved a laser cutter and Adobe Illustrator. The laser, guided by the drawing in Illustrator, is able to burn a crisp line across the surface of the enamel with high heat, essentially over firing it similar to leaving a piece in the kiln for too long.

In order to get started with this technique you must have an understanding of some principles. Ross Kowalski has already started us on the path to lasers with his SNAG technical article “A Laser in your Studio.”  Please consult his article for more in depth information of laser cutter use.

-If the paper towel is not touching the surface in all areas it may affect the line that it cuts causing a blurred line.

Step 1: Your Piece
Enamel your piece with colors that are rated high for its ability to be cut with the laser cutter. The height of your piece should not exceed 5mm in order to keep the machine from hitting your piece as well as keep the focus the same.

Step 2: Your File
Using whatever software you are familiar with create a vector file that display the design you would like to burn into the surface of your piece. Be sure to create measurements correct for the size of your piece as well as completely enclosed lines (though not necessary, it just creates better cuts). 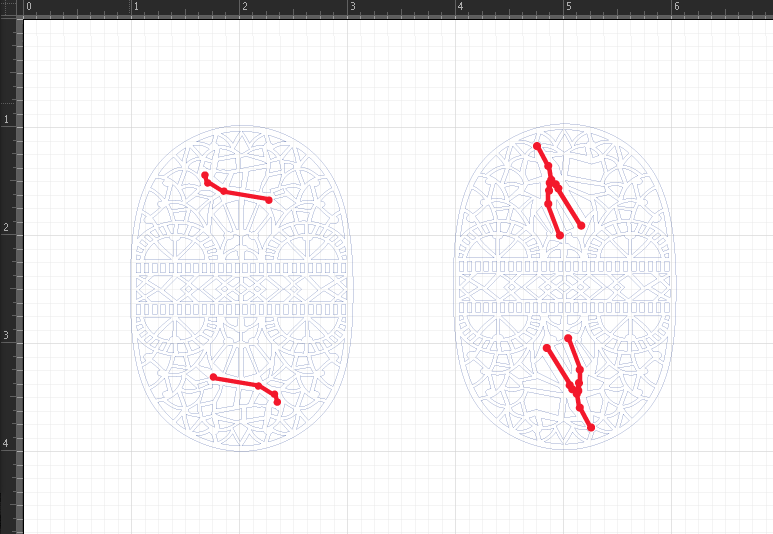 Step 3: Wet Paper Towels
One of the most important thing to not forget is to lay wet paper towels over the surface of the enamel to keep the laser from bouncing back into itself. Just wet a couple of paper towels and lay neatly down on top of your piece making sure it touches thoroughly on the surface. (see below) 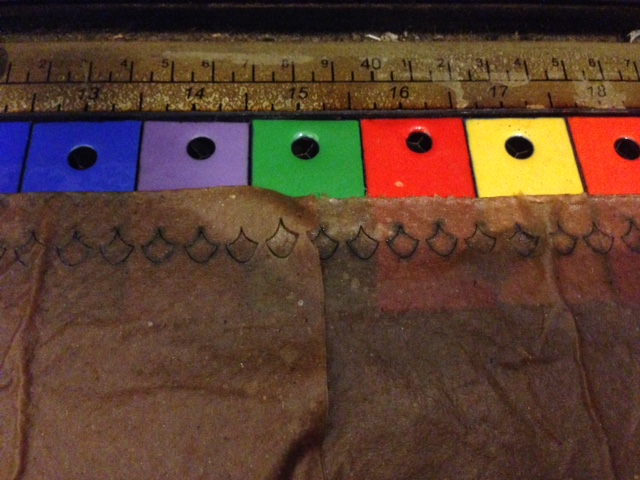 Step 4: The Settings
Each laser cutter is different but like I said above the settings I use for our Epilog Helix are 76% Speed, 100% Power and 5000Hz Frequency.

The frequency is possibly the most important due to the clean lines we need for this process. If the frequency is too low the cut will look more like a perforated line like on the spine of notebook paper ready to be torn out instead of a fine continuous line. Once you have the settings how you like (I recommend doing a couple of test tiles to figure out the right settings for your machine by adjusting the speed and power) send your print to the laser cutter.

Step 5: The Cut
Once the file is loaded on the machine there is very little you need to do from here other than hit “GO” and patiently wait for it to finish cutting. (Wear #14 welding glasses if you have, otherwise just don’t watch the laser as the burning is very bright)

Step 6: After the Cut
After the machine finishes its cut of the enamel, wait for the machine to go back to it’s resting position. Once there you can take your piece out but be careful as it may be hot to the touch if you did a lot of cutting. From here you can clean your piece off (there may be some left over charring and debris from the paper) with some soapy water. You can refire the piece but it will lose some crispness of the lines, but likely the lines will be fairly permanent.

Results of Laser Cutting
The enamels have been divided into three separate classifications (suitable, suitable with errors, and unsuitable) based on their ability to be cut using the above settings with our laser. In the images below, three representative examples (1060 White, 1055 White, and 1010 Undercoat White) are shown to cover the different classifications. The examples are all of the same basic color, white, to emphasize the fact that no specific color is more acceptable than another for the laser engraving technique but rather a matter of the constituents used to create the shade, i.e. the colorant is not necessarily the main component in determining whether the enamel will allow for a nice clean cut. Optical microscopy was performed on both the surface region and along the laser engraved region for each of the three samples. Looking at the surface, it’s difficult to distinguish a tangible difference between 1060, 1055, and 1010. All three exhibit similar morphologies on the surface, a white matrix with darker gray spots (these are pores and inclusions in the enamel). Also, a brushed texture is apparent on all the samples due to the enamel application process.

Bottom line is first test, top line is test two. The classification is based on the quality of the top line. The images above were gathered using a flat bed scanner for a visual representation however they do not show the full quality of the line cuts on some examples.

However examination along the laser cutting path allows for a comparison of the different classifications. It appears that the suitability of an enamel for this laser engraving technique is based on the laser ability to penetrate and melt the surface layer. Close observation of each micrograph reveals cracking along the cut line, mostly due to thermal stresses created during the process. Also, it appears that a suitable enamel (such as the 1060) allows for a much deeper penetration and easier localized melting around the laser. In the 1060 sample, the mid line of the engraving, i.e. laser path, is fully visual with the aid of normal light microscopy and is continuous along the entire engraving, while the 1055 enamel has a much less defined mid line that is discontinuous. Both of these enamels, 1060 White and 1055 White, are still classified as suitable and suitable with errors, respectively, for use with this laser engraving technique. Looking at the micrographs of the 1010 sample, which is unsuitable, there is no clearly defined mid line and it appears that with the current setup the laser is unable to effectively penetrate deep enough and melt the enamel around the lasers cutting path. Further investigation using a scanning electron microscope (SEM) equipped with an energy dispersive spectroscopy (EDS) system allows for relative compositions of the three different enamels. In order to prevent electrical charging of the enamels during microscopy, since the enamels are electrical insulators, they were first coated with a very thin layer of Au-Pd. Table 1 summarizes the results of a standardless quantification, using the ZAF method, of the spectra obtained for each enamel, although a warning is given to not take these compositions as exact or even necessarily close to the real values of atomic percentage but rather as a qualitative comparisons between the different grades of enamels since all measurements were taken under the same exact experimental setup.

The 1060 and 1055 are very close in overall composition and mainly differ in relative amounts of Sb, Ca, and Si. While the 1010 is completely different in composition with far more Al and less Sb and Ca. Also, 1010 has the added additions of Ba, F, and K. Consideration of common white enamel constituents, provides a possible hypothesis as to what is causing the difference in cutting effectiveness between suitable, suitable with errors and unsuitable enamels. The higher concentration of Sb in 1060 most likely means a greater concentration of Sb2O3 is present in the 1060 sample than the other two. Antimony trioxide has a much lower melting point (~650° C) than other oxides such as quartz, SiO2, (~1700° C) allowing for the laser to more easily penetrate and melt the surface of the enamel to produce a cleaner cut. The additions of K and Ba and higher concentrations of Al and Na in composition of the 1010 suggest that a much higher concentration of feldspar is used in this grade and the addition of F suggest a possible addition of cryolite not found in the two other grades. This leads to an initial hypothesis that either feldspar or cryolite is the cause for producing such an unsuitable cut in the different enamels. However, in order to confirm or reject this hypothesis more research is needed specifically on the bonding and oxidation states of the constituents used in the enamel powders and the examination of more samples. EDS line scans were conducted across the cut to observe elemental depletion or accumulation along the laser’s path. Both the 1060 and 1055 again had similar results with Ca and Sb depleting in the laser cut region, while the 1010 sample showed a clear depletion of Al and an accumulation of Sb. These depletions and accumulations are probably caused by diffusion due to the localized heating. It’s interesting to note that Sb is depletes in the two suitable 1060 and 1055 enamels and accumulates in the unsuitable 1010 around the laser cut. At the present time, this result is not fully understood and further research is needed to generate possible hypotheses as to why and how this affects the quality of the laser cut. 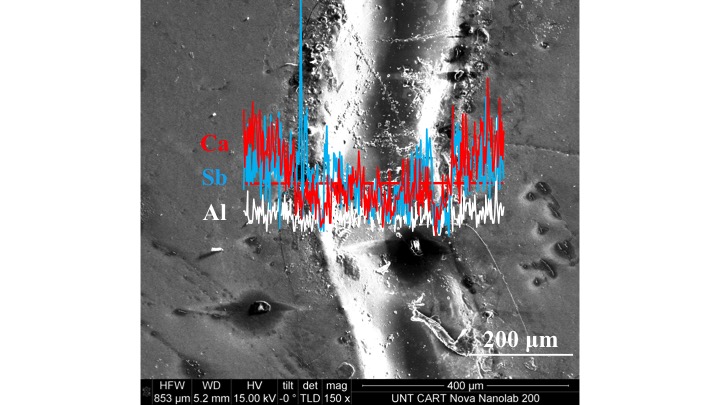 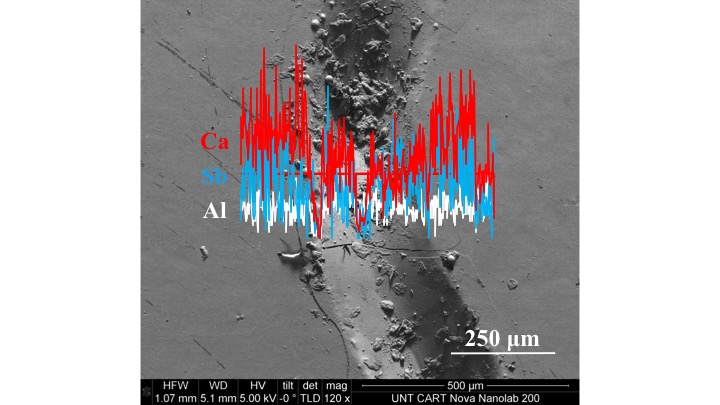 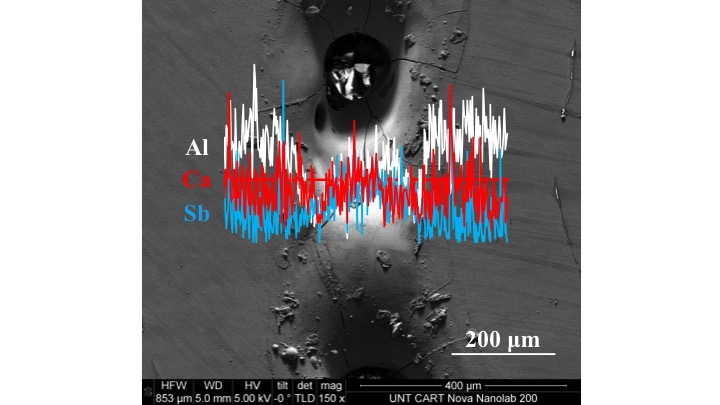 Acknowledgements
The authors would like to thank the University of North Texas for use of the Center for Advanced Research and Technology (CART) facilities and characterization tools to gather all scientific data in this article, as well as Ms. Doree Deleon for her assistance in the creation of the enamel samples. 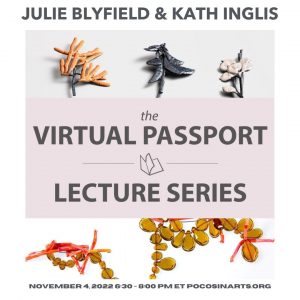 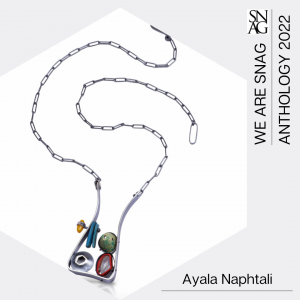